The great age of rebuilding took place between 1284 and 1392. The exterior of the Cathedral reveals the different kind of stone used. Carboniferous fine-grained limestone cut into square blocks

came from quarries at Cefn nearby. The fine-grained yellowish sandstone was quarried at Flint or Talacre and used for the outer casing of the walls and for mullions and other carved work. 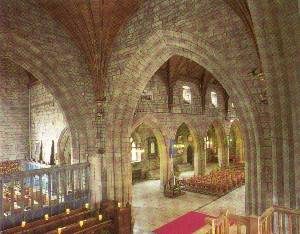 The same distinctive purple sandstone quarried two miles away is found in the Cathedral and in the lower courses of the walls of Rhuddlan Castle. The free tenants of the Dean and Chapter were bound to find six competant labourers to work in the ‘Red Rock’ every day of the year except on Sundays and holy days. This red sandstone is to be seen in the southern and western walls. Anian II was succeeded as bishop by Llywelyn of Bromfield (1293-1315). His first work was to reform the administration of the Cathedral, make provisions for the Cathedral services and to ensure that the sources of revenue for the Cathedral were sufficient to maintain the building. Rectorial tithes were given as well as ‘Terra Faborum’ (fabric lands). Once this was done Bishop Llywelyn set in motion the rebuilding of the Cathedral. Dr. John Madison suggests that a unified scheme was undertaken sometime between 1310-1320:-

‘The nave arcades, the crossing and upper parts of the west front were built afresh and a new west doorway was inserted. The aisle walls were partially rebuilt and refenestrated and above the aisle roofs rose clerestory of perfectly square, cusped windows. The transepts, which were the last works to be rebuilt, were probably added between c.1315 and c.1320.

The Cathedra (Bishop’s seat) next to the fifteenth-century canopied stalls.This building programme was influenced by the military works being undertaken at Caernarfon Castle. The person probably responsible for the rebuilding works at the Cathedral is Master Henry of Ellerton (d.1323) who succeeded Master Walter of Hereford (d.1309) at Caernarfon.

Money to finance rebuilding and maintenance was raised in a variety of ways. Pilgrims were encouraged by indulgence to visit the Cathedral and give alms to the fabric. The chief object of their devotion must have been the Shrine of St Asaph (mentioned by Edward I in his letter to Pope Martin IV), and the Reliquary in which was preserved the famous copy of the Gospel the Evengalthen. It was this Gospel that the canons displayed in neighbouring dioceses on the encouragement of Archbishop Pecham to raise funds for the rebuilding. The bequest of Llewelyn ap Madoc (d.1375) seems to have given the incentive to complete the Cathedral. On 25 October 1391 Robert Fagan, Mason of Chester, contracted to build the bell-tower of the Cathedral, to be finished by All Saints Day, 1392 for 100 marcs. (£66.13s.4d).

On 2 February 1714 a great catastrophe occurred:-

‘A violent storm or hurricane blew down the cathedral and sheets of lead off the tower upon the roof of the quire, broke through the same, beat down the tabernacle work and shattered the stalls and organ, to the damage of three or four hundred pounds’.

This was soon repaired and in 1806 the battlemented parapet was renewed in a simplified form.

In 1402 the Cathedral was visited by Owain Glyndwr and his rebels who wrought havoc. Browne Willis left a vivid description of this calamity:-

The bishop John Trefor II, allied himself with Glyndwr and was removed to be succeeded by Robert de Lancaster, Abbot of Valle Crucis and bishop (1411-33), who re-roofed the nave and carried out other repairs. The damage done to the Cathedral by Owain Glyndwr’s troops is probably exaggerated. The transepts remained roofless until the work of restoration was completed by Bishop Richard Redman (1471-95). It was during his episcopate that the canopied stalls were designed and a stone pulpitum in the east crossing arch erected.