The transepts were the final stages of the major fourteenth century rebuilding. Dafydd ap Bleddyn was bishop (1314-46) and, in 1336, appropriated the parish of Nantglyn to the Cathedral for the better maintenance of ten vicars and for the celebration of two daily masses in the newly built south transept. In the early nineteenth century the roofs of the transepts were sealed with stucco. 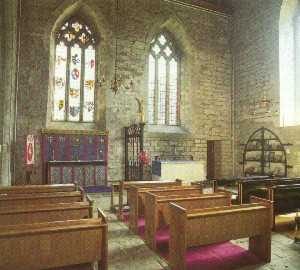 The ancient Chapter House, externally north of the chancel, was demolished in 1779 and Scott’s plans to replace it never matured. The transepts became extra-liturgical places. Gradually space was acquired, firstly, by the foundation of Dean Watkin William’s library in 1895. Secondly, in 1954, designs were prepared by Mr R.S. Nickson for a polygonal Chapter House and connecting cloisters on the former site. A vestry building on the south side was connected to the south transept by a short cloister. The vestry wing was built 1956-7.

The North Transept – (The Translators’ Chapel)

Until the building of the vestry the choir robed in the Translators’ Chapel which was dominated by ‘a massive meorial’ to the avaricious Bishop John Luxmoore (1815-30) and his sons. This has been dismantled and replaced by a simple stone memorial to the Bishop. Two mural tablets on either side of the north window commemorate Richard Price Thelwall and Anna Maria Lloyd. There is a copy, after Andrea del Sarto, of the painting Madonna of the Harpies depicting the Blessed Virgin Mary with her son Jesus, the Harpies (seated) and St Francis and St John the Evangelist.

A carved figure by Ellis Wyn Roberts of St Asaph, depicting the Passion, was made for the Cathedral in the late 1960’s and stands before the alter.

The north transept was furnished as a memorial to Bishops Reginald Heber and William Walsham How both distinguished hymn writers and former Canons of this Cathedral. Here the Blessed Sacrament is reserved. It is a place of prayer, meditation, remembrance and thanksgiving for the contribution made by the diocese to the translation of the Welsh Prayer Book and Bible in the sixteenth and seventeenth centuries. Many of the original copies of these treasures are displayed in the north and south transepts.

A wall plaque commemorates Bishop John Charles (1971-82), a Welsh and new Testament Scholar of the panel of translators of Y Beibl Cymraeg Newydd, published in 1988.

In the churchyard is the Translator’s Memorial, by Middleton & Prothero of Cheltenham (1892), commemorating the tercentenary of Bishop William Morgan’s Welsh Bible of 1588. The form is octagonal and the canopied niches are occupied by statues of the translators. Above them is a ‘lantern’ – an appropriate crown ‘Llusern yw dy air i’m traed a llewyrch i’m llwybr’ (Ps. 119 v 105) translated as ‘Thy word is a lantern unto my feet: and a light unto my path’.

The translators were: William Morgan, Bishop of St Asaph (1601-4) translator of the Bible into Welsh (1588). Richard Davies, Bishop of St Asaph (1560-61) and Bishop of St David’s (1561-81), translated a portion of the New Testament. William Salesbury, published in 1546 the first Welsh printed book; the Welsh translation of the liturgical Epistles and Gospels in 1551; the Welsh translations of the New Testament and the Book of Common Prayer in 1567. Thomas Huet, Precentor of St David’s, translated the new Testament book of Revelation in 1567. Richard Parry, Bishop of St Asaph (1604-23) revised versions of the Welsh Bible and the Book of Common Prayer in 1620. John Davies, (d.1644) Rector of Mallwyd, chiefly responsible for Parry’s Bible and Prayer Book. Edmund Prys, Archdeacon of Merioneth a helper of Bishop Morgan and author of the Metrical Psalms in 1621. Gabriel Goodman, Dean of Westminster, assisted in the production of Bishop William Morgan’s Bible (1588) and was responsible for the translation of the New Testament book, ‘The first letter of St Paul to the Corinthians’.

The South Transept – (The Lady Chapel and Chantry Chapel)

In 1721 the south transept, known as St Mary’s Chapel, was divided into two by a brick wall fourteen feet high. From this time it was used as a Chapter House, Consistory Court and Library until Dean Watkin Williams built a new Chapter House and Library. Without consent he removed the Consistory Court to his new building prior to his elevation as Bishop of Bangor (1899). Also removed were the monuments to Anian II and Dean Shipley.

The Lady Chapel was brought back into use in 1921 and there are now two alters in the south transept. The seating, dorsal and frontal, in the Lady Chapel were given in memory of Thomas Havard Bishop of St Asaph (1934-50) and Bishop of St David’s (1950-56). In the Lady Chapel is the carved ivory sixteenth-century Spanish statuette, known as the ‘Spanish Madonna’. It is of uncertain provenance but tradition has it that it was part of the ‘loot’ taken from the Spanish Armada. It was donated to the Cathedral by the Gladstone family of Hawarden.

Missing from the east window of the Lady Chapel is Eginton’s portrayal of Christ which has been moved to Llandegla parish church. Remaining are the armourial shields of the donors of this window which formerly stood at the east end of the sanctuary.

The Chantry Chapel was restored in 1957 through the generosity of the Guild of All Souls. The modern crucifix has been used in the Good Friday Liturgy. The modern screen, between the Lady Chapel and Chantry Chapel, is surmounted by a striking angel and bears the Arms of the dioceses of Bangor and St Asaph and is in memory of Daniel Davies, Bishop of Bangor and Frances Hester Maria, his wife.

The arched recess in the south wall of the Chantry Chapel was discovered in 1931. Dean Du Buisson thought it was probably the canopy of a tomb and this recess is now used to display some of the Cathedral treasures.