The beauty of the nave is created by the use of its space. This was noticed by Dr Johnson, almost reflecting his own person, it ‘… has something of dignity and grandeur’. Hubbard’s reaction was ‘… it is a strong and grave Welsh Cathedral church that it may be appreciated and enjoyed’. The purpose of restoration, re-ordering and refurbishing, from the time of Scott, was to use space and function economically; to sympathetically order and provide the furniture necessary for worship by preserving and restoring that which was worthy and removing that thought to be ugly and profane. 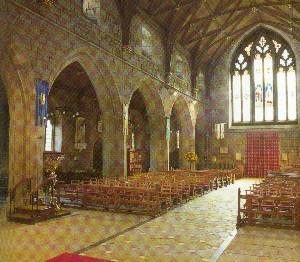 Parts of the lower walls of the nave survived the fire of 1282. The rebuilding of the nave is dated c.1310 when the nave arcades, the crossing and the upper parts of the west front were built afresh and a new west doorway inserted. Madison comments that ‘the effect achieved by the arcades is very pleasing in its consistency and austerity’ and he reckons ‘the large six light west window is a really fine piece’.

he re-opened the square-cusped windows on the south side and reinstated those on the north.

The nave has boldly withstood the conflagration caused by the Welsh rebels led by Owain Glyndwr, who thoroughly burnt the contents and fittings at the beginning of the fifteenth century. The nave survived the iconoclastic hammers and indifference of the Round-heads when, in the Commonwealth period, Bishop John Owen (1629-51), chaplain to Charles I, was deprived and imprisoned in the Tower. His Cathedral church was desecrated – horses and oxen were kept in the nave, calves were fed in the bishop’s throne and in the choir – and much worse the font was removed and used for a hog trough.

The Cathedral fabric suffered the worldly fancies and foibles of architects who preferred plaster to oak. In the 1820s Lewis Wyatt inserted plaster vaulting in the nave obscuring the clerestory and ignoring the milieu of the fourteenth-century master masons. Sir Gilbert Scott recreated as far as any one could, the simple dignity of the work of those master-masons.

The pulpit is a memorial to Bishop Thomas Vowler Short (1846-70):- ‘Pastoris doctrina, pietate, minificentia insignis’. He inspired the building of church schools, the training of teachers and the building and restoration of churches. To all these he gave generously.

Associated with the episcopacy of Bishop Short was Sir Stephen Richard Glynne, 9th Baronet, (the brother in law of W.E.Gladstone). The north door and the western door (by Scott) are Glynne’s memorial, by public subscription, in appreciation of his wise direction in the Scott Restoration.

The great west window was by Gibbs (1855-6) in memory of Canon Rowland Williams (1779-1854), a Welsh scholar and defender of this diocese, when it was threatened with merger with the diocese of Bangor. The tracery alone remains and the two pictures of St David and Archbishop Alfred George Edwards (Bishop 1889-1934, Archbishop 1920), were installed by Powell c.1940. The window recalls early Christianity in Wales in portraying the nation’s Patron saint; also the Disestablishment and Disendowment of the Church in Wales in 1920 and its first archbishop. The iron-clad chest (1738), by the north door, is attributed to the Davies brothers, ‘Smiths’ of Croes Foel near Wrexham.

Near the north door is a cluster of military memorials to the Denbighshire Hussars (1795-1920) and to the forty-eight men from St Asaph killed in the Great War. The memorial is of unpolished alabaster richly carved; in the centre is depicted St David blessing a Knight before battle. There is also a bronze tablet in memory of Welsh nurses.

On the south side, are various military flags and standards: The King’s Colours of the 16th Battalion Royal Welsh Fusiliers and the flag of the Commune of the village of Obrechier, Flanders, which was liberated by them 1919. Also Banners of the British Legion Wales, Flintshire County, and Women’s Section, St Asaph.

The south aisle contains monuments of the Williams family of Bodelwyddan, one by West-maccot – two angels ascending – in memory of Sir John Williams 1st baronet (d.1830) and his wife Margaret (d.1835), another, by L.Droses, to Sir John Hay Williams, 2nd baronet (d.1859) and of the family of Dean Watkin Williams (1892-99).

Dominating the south-west corner is the life-size seated effigy of Dean William Davies Shipley (1774-1826) holding a pen and scroll, by John Ternmouth 1829, erected by public subscription. The Dean was praised in his life for the defence of liberty, condemned for being a pluralist, remembered as Vicar of Wrexham where Heber’s hymn ‘From Greenland’s icy mountains’ was written.

Near the south transept is a mural tablet to the memory of Felicia Dorothea Hemans (1793-1835) poet, who lived for many years at St Asaph. She was admired by Wordsworth and Lord Byron and is best remembered by ‘Casabianca’ which begins ‘The boy stood on the burning deck’.

Close by is the so-called ‘Greyhound Stone’ c.1330. The sword is placed diagonally behind the shield, and below it is a hound chasing a hare. In Welsh folk-lore a hare is regarded as the herald of death.

Another memorial is to Bishop William Carey (1830-1846) who was a generous benefactor to widows and orphans and a builder and restorer of many churches.

In the south aisle is the effigy of Anian II, the great bishop of the thirteenth century, who although dismayed and near destroyed by circumstance, valiantly returned to his diocese to resurrect this Cathedral church. His effigy is here as a reminder that the Church is built ‘upon the foundation of the Apostles and Prophets, Jesus Christ himself being the head corner-stone.

The Hunger Cloth hanging ‘Tree of Life’ in the south transept, is the work of the Haitian artist Jacques Chery. It was commissioned by MISEREOR the relief and development arm of the Catholic Church in Germany.